How Combining Two Passions Landed this Senior a Job at Facebook

Melissa Matalon, W’19, is making connections between her diverse concentrations and the real world, integrating lessons from consumer psychology to statistics.

Melissa Matalon, W’19, has a unique blend of academic passions and now, a dream job at Facebook.

Currently concentrating in Statistics, Operations, Information, and Decisions (OIDD), and Behavioral Economics — while also minoring in Consumer Psychology — Melissa seamlessly combines her qualitative and quantitative skills to work on a variety of enriching projects.

Armed with academic depth and breadth as well as a wealth of real-world experience, she shared insights into her life at Penn and beyond.

Wharton underclassmen may find it comforting to know that Melissa didn’t narrow her academic focus down very early on — she discovered her passions organically over time.

“I definitely didn’t come into Penn knowing what I was going to study, but I joined the Wharton Undergraduate Data Analytics Club (WUDAC) in my sophomore year, and that was a really great learning experience for me,” she said. “I just really enjoyed the club, so I stuck with it, and now I’m part of the leadership for the group.”

Melissa adds more humanistic elements to data analytics by also studying psychology and economics.“Behavioral Economics and the Consumer Psychology minor are very much intertwined, so I separate [learning] into a ‘psychology’ component and a ‘numbers’ component,” she explained. “I think in order to make hypotheses that you use numbers to confirm, you need to have an understanding of how people think and what motivates them.”

Overall, Melissa believes that young Wharton students don’t need to worry about choosing their future careers — or even concentrations — too soon.

“You’re not alone in feeling like you don’t know what you want to do. Sometimes with your life, you just have to make educated guesses about the best thing for you right now — and know that later, you’re never stuck on one possible path.”

Although Melissa believes that classroom learning provides a great foundation for her career aspirations, she highlights the value of gaining real-world experience as early as possible.

WUDAC consulting work provided Melissa with this exposure, including a project she did for the Wharton Customer Analytics Initiative (WCAI) Accelerator Challenge last year. Her team worked with Clientivity.com, a hotel-booking platform. Melissa explained: “We were trying to improve their travel-agent acquisition efforts to figure out who was most engaged on the site based on which industry people were a part of.”

Her first year in the club, Melissa also completed a project for EA Games involving data on players’ in-game behavior. Her team predicted the likelihood of someone buying new versions of a game based on the way they played.

“That was my first experience doing anything like that,” Melissa said. “Getting to work with real data… you have to make sense of it and clean it. That was a really great experience and I learned a lot from working with the rest of the team.”

The summer after her sophomore year, Melissa landed an internship at CBS Interactive, where she optimized and measured advertisement campaigns on CNET, a major technology-based media website. At CBS Interactive, Melissa built an algorithm predicting optimal times to show advertisements to website visitors. Melissa said that the job was “enlightening,” and she learned a lot by herself.

“I got to use all these algorithms I hadn’t even learned about in class yet,” Melissa said. “In the end, I could really feel the impact I made. People really appreciated what I did, which is really important in terms of measuring my own success.”

The following summer, Melissa was hired by Facebook, a company she had long dreamed of working for. At Facebook, she was tasked with building a tool to automate the process of extracting insights on how people behave in groups.

Again, Melissa learned a lot on the job. She said, “No one in my team had worked extensively with groups before, so I did a lot of my own digging and reaching out to people on the Groups team. I got to do a lot of my own research and had a lot of freedom.”

She also had first-hand experience dealing with issues of data security and privacy. Melissa said: “What I found is that they’re taking [the issues] extremely seriously. Anytime you want to push anything through, there’s a huge process of working with the legal team and the data communications team, and that was also a really awesome, really interesting component to see.”

Melissa has been offered a full-time position post-graduation in the same group she interned with. She’s excited about what the future has in store. “The Technical Program Manager is a really cool role… there’s a lot of task identity, so you really get to see something built from the ground up.” 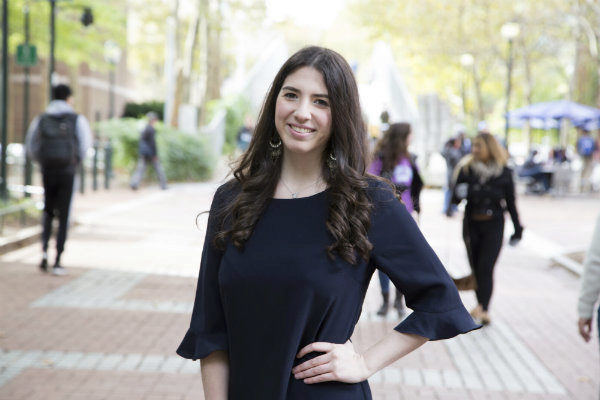 A Day in the Life of Melissa