An interest in consumer retail led Kaylee Tao, W’22, to opportunities and mentorships on campus and off.

Kaylee Tao is from a town that has one grocery store and a movie theater that shows two films. She grew up in New Hope, Pennsylvania, more than 30 miles from Philadelphia.

Coming to Penn from a class of 100 students she’d known since kindergarten was an intimidating experience, she said.

“Within the space between the two traffic lights demarcating the city limits, I built a strong community that I thought I could never find again,” the senior said. “I was shocked to be greeted by such a warm and welcoming community.”

“I remember sitting down on my first day of Wharton 101 on a Tuesday at 9 a.m. and instantly building relationships with eight other students from five different countries,” she said. “To this day, I can still rely on this group of people.”

Kaylee continued to make connections through her classes and extracurricular activities with Greek life and campus groups.

“It’s going to be the best four years of my life in so many ways,” she said of her time at Penn. “I really want to take away not only the education and the achievements through classes and extracurriculars, but the relationships and the people that this place has given me.”

Exploring Outside the Classroom

Kaylee discovered her love for consumer and retail with the help of the Baker Retailing Center. During her first year, the center helped Kaylee with resources including a sit-down with Stuart Weitzman and visiting the headquarters of Harry’s.

“They’ve been able to connect me with opportunities that I wouldn’t have gotten anywhere else. I think that’s really big and something that really sparked my passion,” said the senior.

She’s continued pursuing her retail interest by being part of Highlight, a market-research startup founded by Wharton MBA alumna Dana Kim, WG’20. Since her sophomore year, Kaylee has been the head of emerging business development and brings in beauty, makeup, and food products.

“I apply things I learned at Wharton in a real-life setting and get exposures to the brands and the things that I love every single day outside of the classroom,” she said of her involvement with the startup.

The Pennsylvanian says it’s invigorated her entrepreneurial spirit and shown her that no goal is too ambitious.

“I personally really like consumer and retail because it’s one of those things when you’re talking about industries, that’s so tangible and present in our everyday life,” Kaylee said. “Being able to interact with the things that we do on a daily basis is really exciting to me.”

The senior also took advantage of opportunities held outside of Philadelphia.

The 21-year-old went to San Francisco and New York City as part of the Wharton Industry Exploration Program, which offers short-term courses during school breaks that focus on various industries and cities.

“It’s a very good way to explore those industries in a way that isn’t just being told what they are, but through the perspective and the lens of the people who are leading those industries.”

Kaylee was able to meet some of her role models and Penn alums.

“I asked my burning questions to the founders of Warby Parker and asked former CEO of LinkedIn Jeff Weiner what his favorite books were,” she said. “A one-on-one fireside chat is an experience that you really can’t parallel anywhere else.”

She says the trips gave her a chance to envision her life outside of Penn and within the industry.

“Through the opportunities presented to Wharton undergraduate students, I can confidently say I have learned the same, if not more, outside of the classroom than inside.”

Kaylee wants to use food to connect people, so her long-term goal is to start a restaurant group.

“I think food is one of the most amazing things in connecting people,” she said. “I love to foster relationships and there’s nothing like sharing a good meal, sharing your experience, your culture, and your history through food.”

Kaylee’s parents are from Shanghai, and during quarantine, she was able to learn many Shanghainese things from her grandma.

“Connecting and sharing my kind of food that I’ve grown up with and continues to grow acceptance in the American palette is going to be amazing,” she said. “I think there’s still a lot of white space to conquer and make sure that Asian food, and specifically Chinese and specifically Shanghainese food, is being represented in the world that we see today.”

She took Prof. Angela Duckworth’s  Grit Lab course and was connected to entrepreneurs in the food space who’ve mentored her, like Ellen Yin, W’87, WG’93, who runs the High Street Hospitality Group.

Kaylee interned last summer on the consumer-retail team at the boutique investment bank Moelis and will be returning as a full-time analyst after graduation. 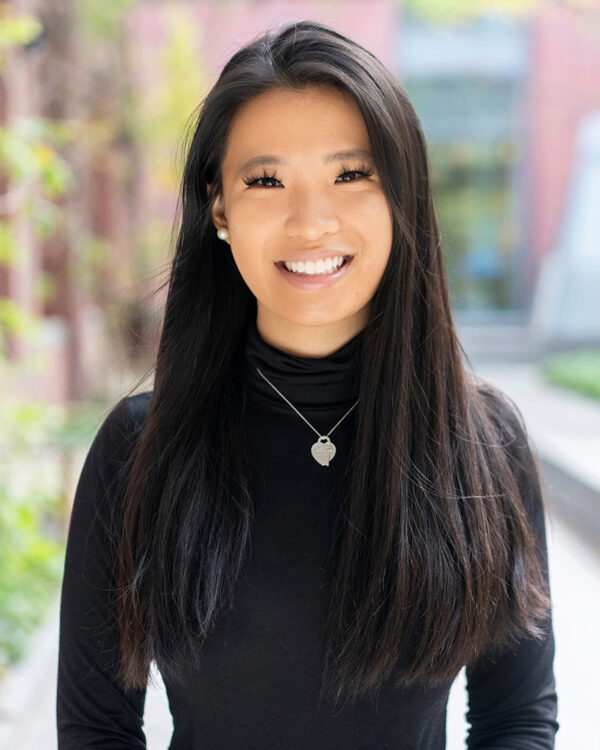 Describe your Wharton/Penn experience so far in one sentence.

The best people, memories, and decision I have ever made.