How Prof. Stephanie Creary Works Towards Inclusion in Research, Teaching, and Wharton Culture

Assistant Professor of Management Stephanie Creary brings her research on diversity and inclusion into her MBA and undergraduate classes.

Prof. Stephanie Creary’s Diversity class not only has guest speakers, it also has guest attendees. When Creary brings in C-suite speakers from Goldman Sachs and Deloitte to talk about diversity to her MBA and undergraduate classes, they draw aspiring future hires, past company alumni, and students, faculty, and staff from across Wharton.

Creary, an assistant professor of management, is new to Wharton this year, but she has a powerful contact list to draw on. Her seven-week class on diversity, offered in separate sections for MBA and undergrads, was Wharton’s first, but she’s already offered it for a second time this spring.

“Diversity is a focus on attributes and the numbers. Inclusion is a focus on the experience of people in an organization — and that, for me, is the basic difference,” she said.

How She Got Here

Creary’s path to Wharton is already a long one.

“Where I grew up in Las Vegas, when you say you want to help people for a living, people recommend that you either become a teacher or work in health care,” she said.

She earned both a bachelor’s and master’s degree in speech therapy. But during her college years, she became involved in campus diversity efforts.

“These were the topics on my mind, both health care and diversity, which are things that I research now. These formed the foundation of the research I do today,” said Creary, who is also a senior fellow at Wharton’s Leonard Davis Institute of Health Economics and affiliated faculty with Wharton People Analytics.

As a professional working in health care, she observed dynamics that could only be explained by gender and racial differences, and she decided to pursue an MBA at Simmons School of Management, which at the time was a women’s-only program. The classic MBA curriculum also included thinking about the implications of gender and demographics in business in its organizational behavior class taught by professor Stacy Blake-Beard, her then mentor.

Two weeks into the semester, Creary knew that organizational behavior research was what she wanted to do. She earned an MBA, then became a research associate at Harvard Business School and the Conference Board, writing on diversity practice in corporations. After earning her PhD from Boston College, she landed at Cornell as an assistant professor, continuing her work on health care and diversity in organizations.

Then she got a cold call from Wharton in November 2016 about a position in the Management Department. Creary, who already knew a lot of the faculty in the organizational behavior unit, met with management professors Sigal Barsade, Nancy Rothbard, and Adam Grant during her campus visit, and they talked about the Wharton culture and the climate around diversity and inclusion.

“In October [2016], there were lots of different things happening around the United States that caused campuses to have more focused conversations on how we begin to bounce back from toxic climates,” she said.

Creary’s most recent publication is about how identity shapes workplace relationships, which she discussed in a Knowledge@Wharton podcast.

As she said, “One of the things that people should recognize when they are thinking about presenting their whole self at work, or making decisions around whether or not they should do that, is what’s the larger work context? Is this a culture, a place that allows us and wants us to be ourselves, whether that’s our true work selves or our true personal selves? Is this a place that respects the clear boundaries between work and life experiences? When you’re choosing a place where you want to work, first tackle some of those questions and really focus on choosing the place you want to work based on how it expects you to be.”

How She Structured the Class

Creary’s work is directly relevant to the careers of Wharton students and she brings her research right into the classroom for her first-at-Wharton Diversity class.

“I had to create the course from scratch,” she said.

After mulling format, she created a seven-week class with separate sections for undergraduates and MBAs.

On the first day, she found that of her 80 students, none had had a classroom discussion about diversity in organizations. They were fearful at first that conversation would turn negative, so they collectively set norms to offset that fear.

“Many undergrad students have been socialized their entire lives to use the ‘diversity’ word very easily which is fantastic,” she said. “On an intellectual level, they understand what diversity is, but they sometimes take it for granted that everybody might accept that it’s a legitimate practice — why wouldn’t we care about diversity?” Creary said. “On the other hand, many don’t process as easily that bias still exists. When we talk about privilege and meritocracy, it’s harder for them to talk about the ways in which systems may not be merit-based.”

“What is fantastic about the MBAs here is that many of them have worked for the companies I talk about,” she said. “Being able to talk to them on a real level about company practices around diversity and inclusion is really important.”

Sometimes their experiences are all too real.

“It’s shocking for many of our undergrads that there are people out there who don’t believe that diversity is valuable,” Creary said. “MBA students have bumps and bruises and scars from entering into and trying to navigate organizations. They’ve seen the challenges.”

The students in her classes — both undergrad and MBA — are the ones who are motivated to make changes.

Changing organizations is not so easy, and Creary doesn’t have all the answers.

“MBA students sometimes have the sense that what will fix the problem is that everybody needs to have the same information,” she said. “You also have to acknowledge that some people have the information and are ignoring or don’t know what to do with the information that they have.So part of my job is helping them understand how to be a changemaker in an organization. I’m going to give you tools, and everything else you’re learning in your MBA education must be part of the process of leading change in diversity and inclusion in your organization.”

She created separate takeaways for how to create diversity and inclusion as individual contributors, as undergraduates will initially be, as managers and leaders that new MBAs will be, and as senior management, which they will be some day.

“By showing what people can do at all three levels of the organization with respect to the different topics we’ve been working on, students will see how there are many different pieces to this,” she said.

What It Takes to Create Change

The challenge of diversity work is making sure that it’s a priority from the top and shared throughout the company.

“What’s happening is the people who are driving the change tend to be women and minorities, and they are doing all of the work, in addition to whatever their day jobs might be. How do you get other people to believe that it’s their responsibility?” said Creary. “You absolutely have to have senior management supporting diversity and inclusion and talking about it and putting resources behind it.”

One of her guest speakers, Mike Fucci, chairman of the board at Deloitte, told her class, “Diversity moved from a social cause to a business cause five years ago.” Employees with diverse workforces are 70 percent more likely to enter new markets, he said.

“For example, if there’s a woman of color network group, the executive sponsor could be a white male senior vice president,” Creary said. “It’s structured and it’s systematic, and the sponsor is held accountable for attending those meetings, for listening to those groups’ concerns, and bringing them back to the company. That takes some of the responsibility away from women and minorities in the company to fix the issues themselves.”

As Fucci told her class, “You have to develop more inclusive culture by opening the aperture and increasing experiences along the pipeline. Don’t look at the women associates to support women and black associates to support blacks. Diversity is a business issue and everyone needs to solve it.”

Diversity and Inclusion at Wharton

Creary’s Wharton experience is something of a lab in diversity and inclusion. In addition to her class, she worked with MBA students in Return on Equality and the Wharton Graduate Association on programming for One Wharton Week, a celebration and examination of diversity at Wharton.

“I’m an academic. I can talk about abstract ideas all day long, but how do you create a culture of inclusion?” she said. “Inclusion is the mechanism through which all of this learning from diversity and all of this innovation can actually be achieved, but it can’t be achieved unless you have some way of figuring out how to create experiences where people feel like they belong.”

She gave the example of Wharton’s faculty-student lunch program as an inclusive practice, where any student enrolled in her class can sign up for lunch with her.

“It’s not super-secret access to the professor. We have conversations about whatever they want to talk about,” she said. “What would that look like if more students and faculty engaged in this practice with each other?”

One Wharton Week and the work of the MBA Diversity and Inclusion Taskforce are efforts to create that culture. Creary moderated two events, “Split identities: You vs. YOU,” featuring a panel of students speaking about the multiple identities they reveal in different settings, and “The Business of Equity, a discussion of how to build a diverse organization with Vice Dean Howard Kaufold, Wharton MBA Program; Cynthia Bowman, Chief Diversity and Inclusion Officer, Bank of America Merrill Lynch; and Terri Cooper, US Chief Inclusion Leader, Deloitte. 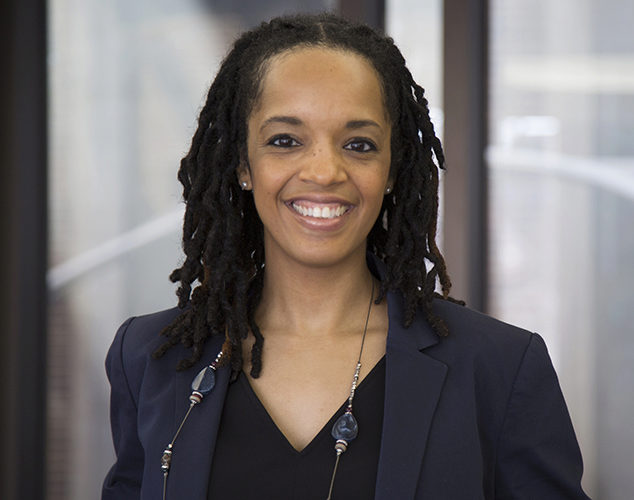