“The students took solace in each other — sharing their apprehensions, insights, pondering about the future — all gave a form of comfort and support.”

As massive support for the Black Lives Matter movement spilled into the streets in cities around the world in early June, Wharton undergraduate students were looking for ways to process their thoughts, become better allies, and take meaningful action. Although the academic semester officially ended in May, the entire undergraduate community was invited to a virtual Town Hall on June 5 — one week after the first weekend of protests. The Wharton, Equity, Diversity, & Inclusion Group (WEDIG) and the Black Wharton Undergraduate Association (BWUA) worked together with the Wharton Undergraduate Division to organize the open discussion, which drew more than 70 students.

“We wanted to really amplify Black student voices during the Forum. That was our first priority. And then we pivoted during the Forum to open it up to non-Black students to talk if they were inclined to do so,” said Lee Kramer, Director of Student Life for the Wharton Undergraduate Division who spearheaded the event.

For the organizers, it was critical to act quickly in order to provide an outlet for constructive conversation. Students shared what was happening to them personally, how they were confronting racism, the strangeness of operating virtually, the division of national politics, and gave each other advice on how to practice self-care during these difficult times.

“Several students shared their perspectives, but more importantly, those students had their opinions heard and understood by the 70+ other Black students and Allies on the call. Intended to elevate Black student voices, we hoped for the event to be a starting point for further discussions and positive action by student organizations and our administration,” said Javion Joyner, W’22, director of BWUA’s consulting branch and upcoming co-chair of WEDIG.

“It did not escape us in the planning process that although important, these conversations can be sometimes difficult to navigate,” said Oyinkansola Sofela, W’21, who will be joining Javion as WEDIG co-chair next year. “With the effort of the BWUA and WEDIG boards and support from Umi Howard and the Undergraduate Division, we were able to successfully make the first steps in a series of initiatives supporting Black and marginalized voices in our communities,”

“The students took solace in each other — sharing their apprehensions, insights, pondering about the future — all gave a form of comfort and support,” said Umi Howard, Senior Director of the McNulty Leadership Program. “Being understood, not just heard, is incredibly important to all people. I hope they felt like they could be real, and were protected in that space, and that it was for them, above all else, in this time.”

Identifying the Next Steps

The hour-long session and followup survey also gave students the chance to offer suggestions for action steps to the Undergraduate Division leadership.

BWUA President Rachael Ozinegbe, W’22, said, “I think the key takeaways for attendees were to continue to speak out about the injustice plaguing our community, to recognize the perils of performative activism, and to continuously care for each other’s mental and physical health as the fight for justice continues.”

“One idea from the students was to provide some group therapy sessions or support groups from CAPS (Counseling and Psychological Services). They are very willing and happy to do so and we’re working with CAPS to figure out the logistics. I’m glad that we’ll be able to do that for our students,” said Lee. Since the forum, WEDIG and BWUA have been working in collaboration to communicate Black student priorities to adjust the curriculum, classroom experience, and the School’s relationship with the West Philadelphia community.

What’s clear is that conversations within the Undergraduate Program will continue. “This is not the only opportunity for students to talk about what they need. This is not the one and only forum,” said Lee.

“In the future, we hope to continue the conversation started in the Forum, to turn that conversation into action, and to make Wharton an equitable and inclusive place where every student can thrive,” said Javion. 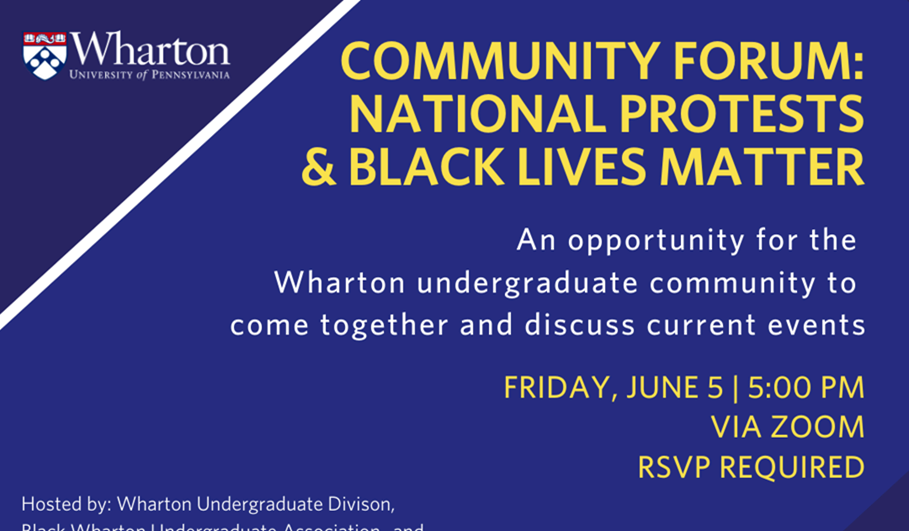