First-Year MBA on Tech Recruiting, Unconscious Bias, and How People Analytics Can Help

People know everyone here is smart because you’ve met a set of requirements to be here.

Lauren Daniels, WG’17, will be working at Google this summer, but the decision on where to spend her internship after her first year was a nail-biter.

“That’s the part that’s risky about tech recruiting,” she says. “It happens late.”

Lauren started her MBA year focused on academics while some classmates recruited early and heavily for consulting and finance. She stayed selective when recruiting at technology companies.

“At the beginning of my job search, I was only looking at specific companies, but then as I went on, I realized that there are lots of really interesting opportunities I didn’t think of. I opened up my search a lot – especially as it got closer to the summer,” she says, laughing.

She’s glad she waited – at least she was as soon as she secured the Google internship.

“It’s a little crazy because I didn’t think I would actually be able to land the internship when I was interviewing,” she says. “Most of the people I know going to Google didn’t find out until April. At that point school was winding down, so it was nerve-wracking.”

She tried to listen to the second-years who told her it would work out. “When it’s mid-April and you don’t have an internship, you feel like your future looks bleak, but every single one of my friends is going off to do something for the summer that is truly amazing.”

A psychology major at Wake Forest University, she gained most of her business knowledge on the ground at a New York-based technology startup.

“As the company grew, I was embedded in all the goings on,” she says. “But when operations would talk about about accounting, for example, it was over my head. I thought it would be really good to understand this on a core level. “

One change she knew she wanted was to move from advertising technology to another field, while staying in product management. “Coming back to Wharton was a good way to find out what I wanted to do, get the skills I needed and move on to a company that satisfies my soul,” she says.

Once she came to Wharton, she found people analytics, which appeals to both her tech side and her psychology interest. While human resources is often based on soft-skills-based, people analytics applies analytical models to performance and retention data.

“These are things that can really change lives. You can see how you can meet workers better,” Lauren says.

She and two Wharton teammates competed in the People Analytics case competition and won third place.

“We used some of [Marketing Professor] Pete Fader’s work on how to think about customers, and we applied that to how to retain people,” she explains. “It’s an interesting concept – taking models that work in other spaces and applying them to better understand your staff, meet their needs, and get them to stay.”

Finding ways to take some of the guesswork and human bias out of the environment is close to Lauren’s heart. When she worked in technology, she often felt the effects of gender imbalance in the industry.

“In tech there is a lot of unconscious bias,” she said. “There are times when women have to work a little harder than men. And I definitely got asked to do some administrative tasks that you never would have asked one of the guys.”

She gives a simple example of when a coworker was getting married, she was asked to buy the card. “We were a flat organization, and I didn’t know the guy getting married well – why isn’t one of his guy friends going out to get the card?”

Although Lauren found that she had credibility and institutional knowledge because she had been at the company from the beginning, other women who joined the company had a harder road.

“Even if you have credentials, the proof happens on the job when you’re a woman,” she says. “I think men don’t need that proof. They have more credibility right out the gate.”

She recounts when a new male coworker made mistakes, others said, “It’s OK, he’s still learning.” When a new woman did the same, they said, “I don’t know if she’s going to work out.”

“There’s a lot that can be done to remove unconscious bias,” she says. “There is a push for attracting women to technology, but at the same time when you’re actually in the field, you can see that a lot of the problems aren’t conscious decisions, but unconscious biases. I would personally rather have data help make the decisions than just personal feelings.” 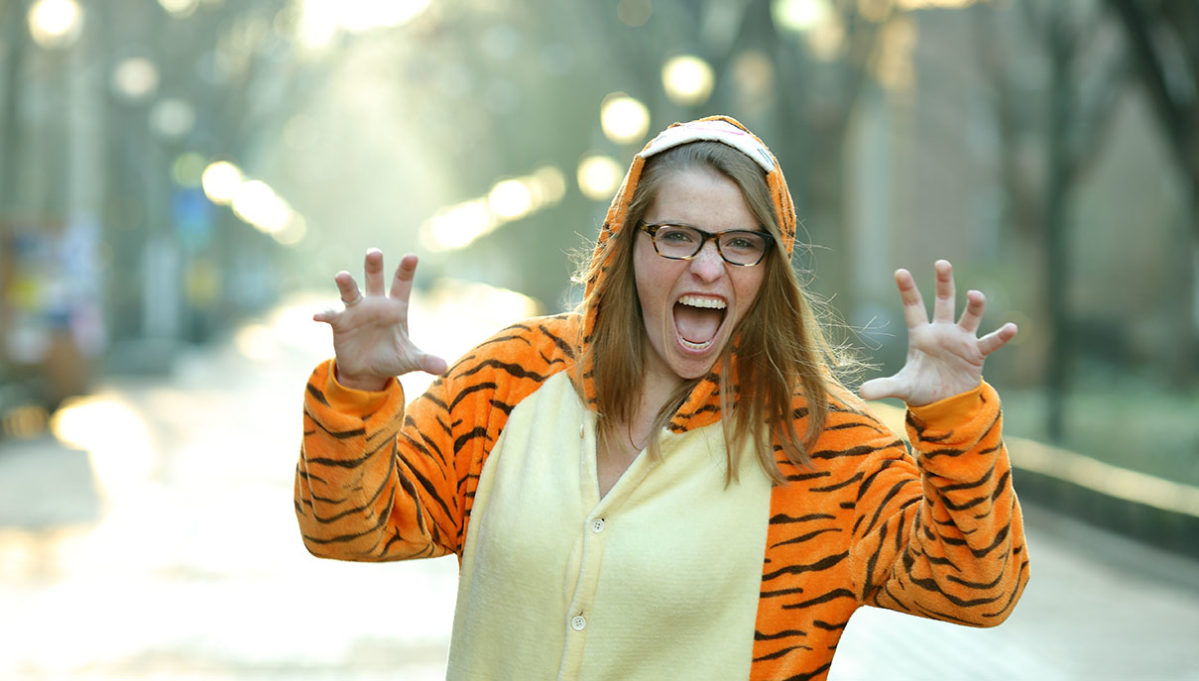 Lauren finds the atmosphere at Wharton to be more open than tech.

“It’s not like we’re in a utopia, but when I’m in classes or projects, I don’t feel bias,” she says. “People know everyone here is smart because you’ve met a set of requirements to be here. Everyone expects you to perform at a high level.”

When biases crop up, she says at Wharton people talk about them. “With Wharton Women in Business, the 22s, Return on Equality, we can have discussions and educate people,” she says. “I hope the conversations we have here will remove those biases and change perceptions. I’m more confident in my abilities and not worry that if I make a mistake people will think I’m not competent and confirm their biases.”

“When I’m back in technology, I’ll still have these conversations no matter what,” she says. but I want to go into people analytics to see how companies can change for the better,” Lauren says.

Helping Others Find Their Way

Next year as a Student Life Fellow Lauren will be wearing her psychology hat – and occasionally a tiger suit. Student Life Fellows are second-year student assigned to a cross-cohort group of about 20 first years to help them transition smoothly to Wharton.

“There’s a lot more to being a student at Wharton than just going to classes,” she says. “I want to help the incoming class navigate that path find and what’s right for them. When you come in, you have the sense that there is someone here who is helping you figure out.”

Lauren tries to imbue a sense of fun as well – hence the tiger suit, representing the mascot of her cluster. “I don’t take myself too seriously,” she says. “This is Wharton but you don’t have to be serious all the time.”

Lauren and her long-term boyfriend got engaged in March, and she’s spending the brief time after finals on wedding planning before heading to California and Google. She’ll be working in product management there, but the company impresses her on the people analytics side as well.

“Google has one of the most sophisticated people analytics platform, and when you talk to people at Google they’re often some of the most satisfied employees,” she says.

“I want to make an impact on people,” Lauren says. “I want to do something where I wake up every morning and feel that I am improving something. I’m just not sure what that something is yet.”