Abhishek Prakash, WG’20, says the diversity of perspectives and collaborative learning environment in the EMBA program is worth the commute from Houston.

When Abhishek Prakash, WG’20, began his career in the oil and gas industry, he had to choose between an office job and a position that offered global travel to process seismic data. He chose the second option and spent more than four years working in different locations across six continents.

“I was on the ocean for weeks at a time acquiring and processing data for clients. When I got off the boats, I worked at the nearest office to help analyze and clean up the data as well as explain the client’s needs and strategies,”Abhishek said.

When he got engaged, he decided to pursue an MBA to move into a more traditional role. However, the day his business school application was due, his company offered him a position in Houston. It was too good to pass up, so he delayed school to experience working in the U.S.

“A year after moving to Houston, I got my first major taste of an economic recession in 2014. This forced me to think beyond the regular day-to-day operations and work on understanding the business side of the industry. I wanted to help shape the direction of my industry and contribute to strategy discussions,” he said.

A few years later, he decided it was time to get an MBA. “I didn’t want to disrupt my career, so I looked at EMBA programs. My biggest requirement for a program was diversity. I wanted exposure to ideas and perspectives outside of the oil and gas industry. This ruled out programs in Houston, which is saturated with oil and gas professionals.”

In the end, Abhishek only applied to Wharton. “I came here for the diversity of students’ backgrounds, the rigor of the curriculum, the school’s reputation, and the broad alumni network,” he said.

Abhishek’s commute from Houston turned out to be a “big benefit” because flights provide uninterrupted time to study.

“I left on Thursday afternoons, listening to audiobooks on the way to the airport, and then had a solid three to four hours of study time on the direct flight to Philadelphia. I woke up Friday morning fresh and prepared for classes, which was key because if you’re not prepared then you won’t get as much value out of the program,” he said.

When classes end on Saturday, he enjoyed the time at the airport with his classmates. “That is part of the EMBA experience because we hung out and talked about assignments and life in general. I usually worked on the flight home, which gave me a head start for the week ahead.”

Abhishek said that coming to Wharton was one of the best decisions he has made in his career. “This program is helping me tremendously in developing my skills, gaining visibility, and moving up the career ladder.”

When he started the program, Abhishek was in “a traditional business development role with limited contribution to his company’s strategy.” Within a few months of starting the EMBA program, he utilized his learnings to develop a comprehensive analysis for identifying competitors, collaborators, and disruptors for a new product offering that was designed to revolutionize subsurface exploration.

“That project gave me more visibility, and I was asked to take on a special strategy project working directly for the president of my division. The project was high visibility and gave me access to senior leadership as I created and presented a strategy for future businesses,” he said.

Learning in a “Collaborative” Environment

Abhishek said one of the “greatest benefits” of the EMBA program was the ability to learn from his classmates. “If you have a question, chances are that one of your classmates can help or knows someone who can help. I learned so much from my classmates who work in other industries and this knowledge has been instrumental in bringing outside perspectives to my industry. That would have been impossible if I attended a program dominated by oil and gas professionals.”

For example, “I had classmates who work in FinTech and private equity, who invest in oil and gas assets, and I talked to them about how they perceive business and that gave me insight into how other industries approach data.”

The faculty are an important part of this environment, noted Abhishek. “I’ve talked to many professors about my work and they provide insights on industry trends. When I did the modeling project for my former company, I talked to Statistics Prof. Richard Waterman for advice. The EMBA faculty have visibility into what is happening in industry and enjoy talking to students. I’ve taken different approaches based on those conversations.”

Abhishek pointed out that Wharton was his first experience attending school in the U.S. “I was a little concerned about fitting in and how I would balance everything,” he said. “For example, we didn’t have learning teams in my prior schools, so I wasn’t sure how that would work out.”

It turns out that Abhishek didn’t need to worry. “I saw that learning teams become like a family and tackle school together. We take advantage of each other’s strengths and help each other out. We know that life happens during the program. People get married, have babies, or deal with other life changes. We support each other because we want to learn more together.”

He noted that his own family was also “extremely supportive. I am grateful to the two wonderful girls in my life — one who has inspired me to do my best and the other for whom I want to be an inspiration. This program is truly a family experience. While it was challenging, it’s an experience I would do 10 times over if I could!” 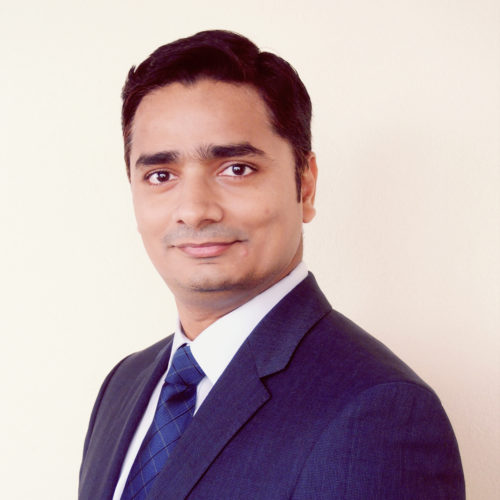 Based In
Houston, TX