Wharton Stories » The Business of Baking: One Student’s Take on an Old-School Treat

The Business of Baking: One Student’s Take on an Old-School Treat

Rachel Prokupek’s deliciously unconventional baklava proved to be both a campus hit and a crash course in entrepreneurship.

Sometimes life calls for a leap of faith. For Rachel Prokupek, W’20, that meant taking a gap year to study French cuisine and pastry at Le Cordon Bleu in Paris. It meant moving to Lebanon in the middle of her sophomore summer to cook. Most recently, it meant applying class knowledge to scale a beloved dessert into a flaky, phyllo-doughed-filled campus franchise: Baklava by Rachel.

To understand Rachel’s journey we have to rewind to July 2018, the summer of her sophomore year. She had spent the first two months interning at a Philadelphia ad agency. Her boyfriend, Adam, was studying in Beirut. When she discovered that Rita, a friend from her days at Le Cordon Bleu, was also in Lebanon, Rachel arranged for the two of them to meet up.

Rita was working as head chef of a modern Middle Eastern restaurant near the coastline; Adam raved about the food. That same night, Rita FaceTimed Rachel — the restaurant was understaffed, and if Rachel wanted a position, she could have one.

“There was a time crunch, or pressure, in a sense — do it now or you may not get the chance to do it again,” Rachel reflected. After much thought, she quit her internship and flew to Beirut, where she would spend the rest of her summer helping in the kitchen and doing the restaurant’s digital marketing. It was on her first day that she stumbled across a dessert that would consume her life for the next year.

“I saw this beautiful baklava that was shaped like a pie,” Rachel said. It was unconventional, as baklava is traditionally smaller, but Rachel fell in love with it. Rita and fellow chef Tommy taught her their modern take. Moving forward, Rachel was in charge of making the baklava. 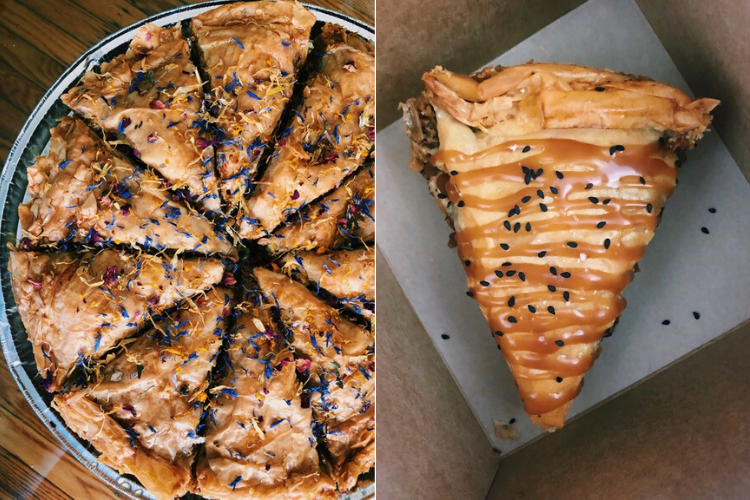 From the Ground Up

Back at Penn, the baklava transformed into a passion project. Rachel made the dessert for her friends and for the student-run food magazine Penn Appétit, where she served as Executive Director for two years. “It became popular to the point where people would start asking me to make it,” she said. An opportunity presented itself.

Rachel transferred to Wharton her sophomore year to pursue her passions in branding and marketing. With her Marketing and Management concentrations and specialization in Entrepreneurship and Innovation, she felt equipped with the classroom knowledge to take her baklava to the next level.

Over winter break, Rachel toyed with the idea. She sourced focus groups through Instagram, trading baklava for feedback. The focus groups helped determine “everything from the taste, the shape, the size, the flavors, the presentation, the sales, the distribution network.” She bought her ingredients, designed a logo (BKLV in the shape of the LOVE statue), and started selling online.

There was “a strong learning curve.” Running a business in real-time required iterating and fixing mistakes on the fly. “I learned so many things about marketing and customers and what happens if you mess up an order or what happens if a customer’s unhappy with it. Those are uncomfortable things, but it’s really useful. You don’t necessarily learn that hands-on in entrepreneurship class,” she said.

She’s grateful to Penn and Philly for being the perfect incubator for experimentation. “Philly’s an awesome food city,” Rachel said. Culinary creatives both on campus and off shaped the way she ran her business — inspiring her online ordering process, introducing her to local test kitchens, being her second home.

“The nature of this campus is supportive of little ventures like this,” Rachel said, “and it’s just such low risk to do something in college. You can get the help of professors. There are funding opportunities. There’s so much stuff on campus that can help you that if you have an idea, there’s no downside to trying it.” 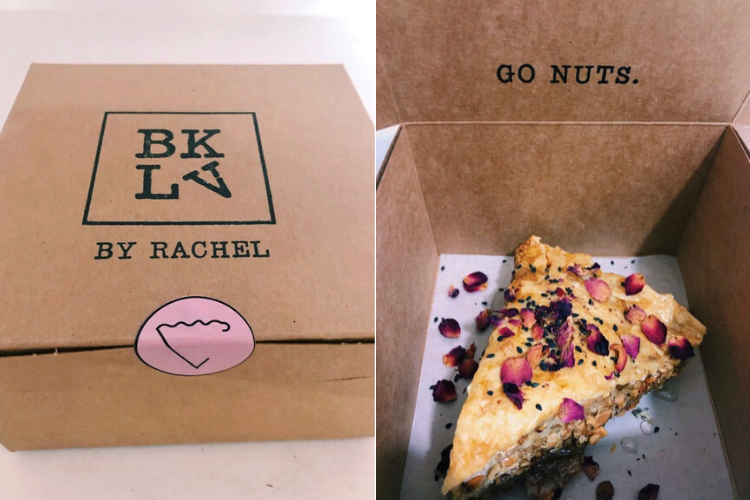 From Here On Out

Baklava by Rachel picked up speed. Some weeks, orders sold out in under a minute. The popularity was demanding. Rachel considered bringing more people on board, but ultimately decided not to. She had started the business as an experiment — simply to see if she could, and she did. Now, her days were consumed by baklava. “I was making so much baklava every single day to the point where I was like, ‘I need a break,’” Rachel confessed. After 6 successful months, it was time to close that chapter.

After graduation, Rachel will move to Dubai with her boyfriend to consult for Strategy&. She came into Penn planning to study international relations and Arabic, and never relinquished those interests. Her summer in Beirut actualized the real possibility of working in the Middle East.

Going from the kitchen to the office won’t be too drastic of a shift — Rachels noted some “very interesting similarities” between the two. Long, fast-paced hours in the kitchen translated to the rigor of the corporate space.

For Rachel, the biggest parallel is receiving criticism. “At culinary school, and in the kitchen, you get very hard feedback. Everything needs to be exactly perfect. If you don’t do something right, then you have to throw it away.”

This past summer, Rachel consulted at EY-Parthenon. A manager had jokingly warned her that he gave tough feedback. She wasn’t too worried. “I’ve worked in kitchens before,” she explained. “I’ve learned how to receive tough feedback.”

Rachel is excited — and slightly nervous — about Dubai. “It’s going to be really hard, but when else would I be able to do it?” she said. She was attracted by the consulting culture in Dubai, which was described to her as “much more entrepreneurial.” And Rachel hasn’t let go of her “dream goal” of working in the food industry. Maybe in the future, she’ll find her way back to it. 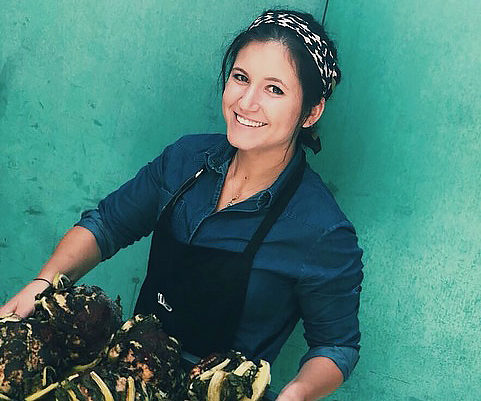 Favorite Class
Rachel’s favorite class at Wharton is MKTG 227: Digital Marketing and E-Commerce. She took it with a former Wharton professor who coincidentally also taught the founders of Warby Parker. She learned about online businesses disrupting entire industries — exactly what she wanted to do with food.