Adedotun Adejare, W’19, was inspired by his travel experiences at Wharton to pursue a Master’s degree as a Schwarzman Scholar in China.

For an undergraduate student, Adedotun Adejare, W’19, has accumulated an impressive range of experiences on his resume. Now in his senior year, Adedotun has already spent three summers in investment banking and consulting and is now setting his sights on China, where he will be spending a year learning with the best students from across the world in the Schwarzman Program.

The Schwarzman Program is an all-in-one competitive scholarship and Masters program that awards Masters of Global Affairs degrees after a year of study at the Schwarzman College at Tsinghua University in Beijing. This year, Adedotun, along with Johnathan Chen, W19, E’19, and Zhongyuan Zeng, MCP’19, was one of 142 scholars selected from over 4000 applicants.

Adedotun chose the program because of its combination of world-class academics and a strong focus on individual interests.

“What differentiated this scholarship from others is that you learn at one of the best schools in the world in an international atmosphere but you also travel to gain a primary source perspective,” he said.

Adedotun, who is envisioning a career in the tech industry, sees China as the perfect launchpad for learning more about technology applications in manufacturing.

Adedotun has taken advantage of multiple global learning opportunities while at Wharton. These courses cemented his interest in technology and applications and encouraged him to apply for a Masters program halfway across the world.

“I did a WIP and a Penn Abroad trip to Israel over New Year’s break. That trip was phenomenal because we got to see different technology companies, manufacturing companies, and how technology and software are transforming manufacturing. And that was the first time I heard the phrase ‘industry 4.0,’ or the fourth industrial revolution, which is basically how different emerging technologies are transforming the supply chain, production, and how you create new items. That was my first insight of seeing wow, this is how technology is transforming operations. I also did a [Global Modular Course], which was to Southeast Asia. This one was taught by Professor Bellace and it took me to Singapore, Malaysia, and Indonesia, so I saw again how manufacturing and operations are helping the economy.”

The Schwarzman Program’s competitive application process encourages students to not just think about their ambitions but also consider the potential negative impact their future career might have and come up with ways to solve these issues. In his application essays, Adedotun reflected on how his interest in manufacturing technology will contribute to the eventual replacement of human labor.

“I want to be in this industry, but it can also create disruption. Manufacturing technology can cut into a lot of jobs, for instance in traditional automotive due to autonomous vehicles and electric vehicles, or other kinds of technologies. So I wrote about how industrialized countries need to do more to reduce the friction in reemployment and to create more robust cities that are accessible to new people, revamping education such that a lot more students can benefit from having an impact on the workforce as opposed to having a hard time graduating without a job,” he said.

In addition to having a social impact component, the application process gave students an opportunity to network with leaders from different areas of life.

“During the final round of interviewing, you interview with leaders in different positions. There was a panel of seven alums and leaders from business, politics, academia, and Tsinghua University. It was cool to get interviewed by amazing people, and also get to talk on a more personal level to see what they do.” 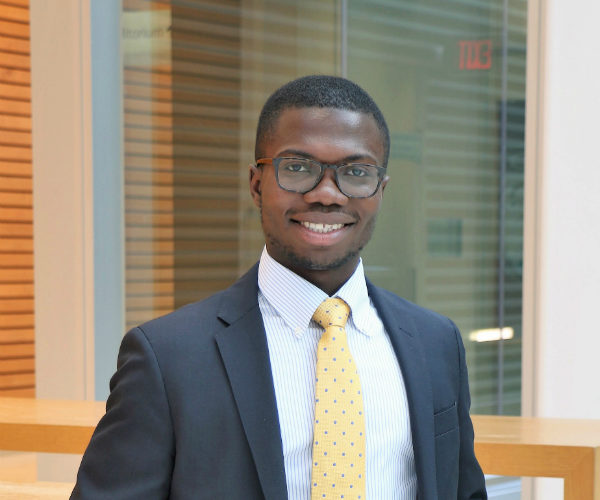 Support From Peers at Wharton

Adedotun credits Black Wharton Undergraduate Association for helping him adjust to the demands of the corporate internship application process during his transition from high school to Wharton.

“I was able to get my internships through Black Wharton. We have a really strong Black Wharton network, especially at Morgan Stanley and also at BCG, so they were instrumental in preparing me for Penn as well as for job applications. They helped me with my resume…how to really be on your game, because there is a high level of excellence required that you don’t even know about because you came from high school. So, all this little stuff like email etiquette or response times, they really helped me through that.”

A Day in the Life of Adedotun