As we begin a new year, we recall some of the most outstanding achievements, memorable people, and trailblazing initiatives that left an impact on the Wharton community in 2017.

In January 2017, a new series of rapid-fire faculty presentations was unveiled in London featuring Professor Maurice Schweitzer and Professor Eric Bradlow. Named after our founder, Joseph Wharton, these bite-size lectures showcase the School’s thought leadership and latest research delivered in a high-energy and palatable format. A full slate of Joe Talks is planned for 2018 taking place in Bangkok, Shanghai, Los Angeles, Mexico City and more. Learn more and register for an upcoming event at joetalks.wharton.upenn.edu.

In “Wharton’s Own ‘Hidden Figure,’” Graduate Executive Board member Lana Woods WG’90 writes eloquently about 94-year-old Hettie Simmons Love WG’47, Wharton’s first African-American MBA graduate. Woods also explores her own experience in partnering with MBA Admissions to host an annual celebration for Wharton’s African-American graduates and incoming minority MBA students in her home in Harlem. The essay shows Wharton’s historical commitment to inclusion, and Hettie’s significance as a trailblazer resonates through Lana’s success and the Wharton alumni of color she mentors today. Read the full story in the Fall/Winter 2017 issue of Wharton Magazine here.

Penn Wharton B-School for Public Policy Kicks Off in DC

PPI launched B-School for Public Policy — a monthly series of faculty-led seminars on Capitol Hill — aimed at providing Congressional staffers with a better understanding of the economic and business aspects of the policy questions they are charged with tackling.

Sessions were led by Kevin Werbach from Wharton’s Legal Studies & Business Ethics Department, who examined the regulatory implications of blockchain technology; Scott Harrington, Professor of Health Care Management and Professor of Insurance and Risk Management, and Tom Baker; of Penn Law, who discusses his research into regulating robo-advisors among others.

The B-School for Public Policy aims to establish direct connections between policy staffers and faculty at Penn and Wharton, to lay the groundwork for ongoing dialogue. You can catch up on each B-School session through podcasts produced in conjunction with Knowledge@Wharton Radio on SiriusXM here. 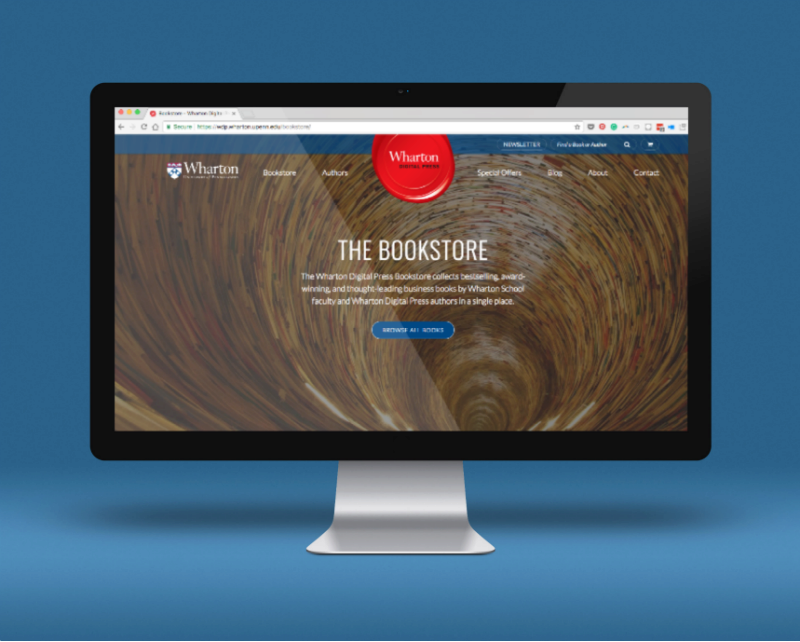 In February, Wharton Digital Press became the first publisher to leverage the e-commerce technology of New York-based Powered by Zola to launch an online bookstore. The new bookstore offers a single point of discovery for thought-leading business books showcasing the depth and breadth of Wharton faculty research and thought leadership.

Among a curated selection of more than 100 business and public policy books are two books published by Wharton Digital Press in 2017: The Ostrich Paradox: Why We Underprepare for Disasters, by Robert Meyer and Howard Kunreuther and The Miseducation of the Student Athlete: How to Fix College Sports, by Ken Shropshire and Collin D. Williams, Jr.

More than 200 students, alumni and leaders from across the country and dozens of representatives from the sports industry participated in the inaugural Wharton Sports Business Summit. The summit included two keynote discussions, multiple panels, workshops, student presentations, and a career fair with representatives from 15 companies. Students had the chance to speak with including Josh Harris W’86, co-owner of the NBA’s Philadelphia 76ers, NBA SVP Melissa Brenner C’96, Senior Vice President of the NBA, and Blake Stuchin C’04 NFL VP of Digital Media Business Development about current opportunities and challenges facing the sports environment.

The accelerator invited companies to submit a data analytics problem for a chance to win a one-month intensive engagement guided by Marketing Professors and WCAI Faculty Co-Directors, Eric Bradlow and Raghuram Iyengar, along with Serguei Netessine, Professor of Operations, Information and Decisions.

The Challenge was launched in response to high demand for scaling analytics across industries, combined with WCAI’s current goal of training the next generation of data scientists with a learning-by-doing approach. 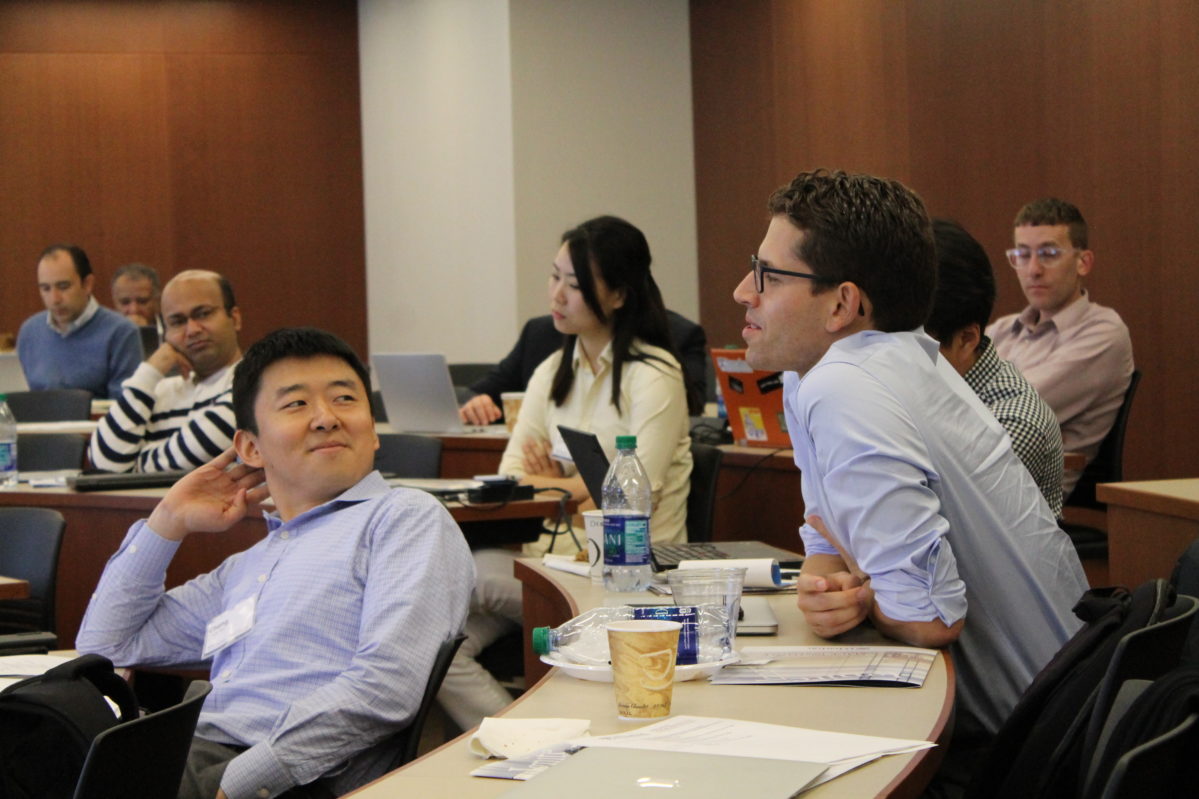 For Wharton PhD students studying innovation, the Mack Innovation Doctoral Association provides a space to share ideas across academic disciplines, explore opportunities for collaboration, and get much-needed feedback from peers.

In October, the student-led group opened the doors to their inaugural Wharton Innovation Doctoral Symposium (WINDS) global audience. Over 100 applications from more than 60 universities worldwide were received.

“By providing a platform for students with different perspectives and from varying disciplines, we filled a high-demand empty niche in the field of innovation research,” said Andrea Contigiani, PhD student in Management.

“Not only was WINDS a risk-free space to share and explore our evolving research ideas, but it proved to be an intellectual delight,” said one participant. “It was so inspiring to learn from my peers and their diverse perspectives on innovation,” said Jungee Lee, a doctoral candidate in Operations Research at UCSD.

As lifelong learners, Wharton alumni have the opportunity to interact with world-renowned professors as they present their research and share the latest thought leadership from Wharton. Over the course of 2017, over 2,300 alumni joined 8 live webinars led by Wharton faculty representing international relations, behavioral ethics, brand, innovation, organizational, and healthcare management.

Learn more about past and upcoming opportunities for webinars at alumni.wharton.upenn.edu/webinars. 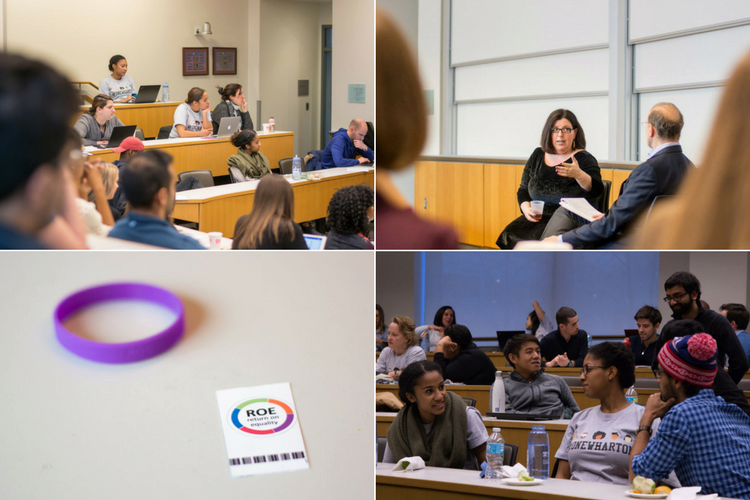 The MBA student-led group Return on Equality held their second annual weeklong series with 16-plus hours of rich discussions and events on race, class, gender, sexuality, and social justice issues. Throughout the week student and faculty engaged in programming designed to break down barriers, open dialogue, and become stronger allies for each other. Prof. Marybeth Gasman (pictured top right) from the Graduate School of Education held an open Q&A session to inform students with actionable ways to take a stance against inequality in their lives. Through a lecture Prof. Sigale Barsade explored the ways implicit bias can drive discrimination in workplaces and communities and offered six takeaways.

There are many opportunities for Wharton students in the MBA Program for Executives on both coasts to connect throughout the program, but this year EMBA started something new — the entire first-year Philadelphia cohort flew to San Francisco for five days of combined classes and activities.

“I’m hoping that the tradition of doing things together across coasts is not just going to expand their network, but make the program stronger,” said Vice Dean of Wharton’s EMBA Program Peggy Bishop Lane. During that week, students took a modular marketing course together, which is a team-based course, so they were assigned to work in teams comprised of both San Francisco and Philadelphia students.  Outside of the Marketing class, taught by Prof. David Reibstein, students organized several social activities for the evenings, including games to promote friendly competition, school spirit, and cross-coastal bonding.

Students Pitch Businesses at the Largest Entrepreneurship Event of the Year

On April 28, 2017, Penn Wharton Entrepreneurship held the first Startup Showcase, including the semifinals and finals of the Startup Challenge — formerly known as the Business Plan Competition. (Watch a video recap of the day’s events here.) During the morning sessions, the 29 semifinalist teams pitched in closed room sessions to panels of alumni, who then chose the eight finalists. Those finalists pitched live that afternoon for a chance to win $135,000 in prizes.

In May, students trekked to China to visit retailers, manufacturers, and malls. At campus in Philadelphia, students strutted their staff on campus at the Penn Fashion Week Fashion Show while Kaley Suero W’17 received a $25,000 scholarship from the National Retail Federation. Select guest speakers in 2017 included Stuart Weitzman W’63, who wowed over 200 students with his million-dollar shoe encrusted with 464 diamonds. Walmart wonders, Marc Lore WG’07, President & CEO, and Scott Hilton WG’07, Chief Revenue Officer, both of the U.S. eCommerce division shared thoughts on Walmart’s acquisition strategy and employee empowerment. Also this past year, the Baker Boards, comprised of traditional and digitally native retailers, met in Philadelphia and Wharton San Francisco to discuss the future of retail. The 2017 conference focused on the research topic of “Consumer Response to the Evolving Retail Landscape” and was attended by participants from 16 countries.

Between May 6 and May 15, nearly 2,000 Wharton graduates — from Undergraduate to MBA, EMBA, and PhD — walked across the stage and into the next chapter of their lives.

Attendees of the MBA Class of 2017 graduation ceremony were brought to their feet by the inspirational words of class speaker Dante Pearson. “We can’t afford to wait while we wait. We’re running out of time to be the person we already say that we are,” Dante said. “If you’ve been waiting for a booming voice over a loudspeaker to tell you when’s the time to start being you, now’s the time to start being you.”Dante’s remarks struck a chord beyond the audience seated in the Palestra. His speech was shared widely on social media after the ceremony and has garnered over 30,000 views on YouTube to date. Watch it here.

The 50th Wharton Global Forum Touches Down in Hong Kong

From thought-provoking speakers and discussions to immersive treks and a gala dinner, the Wharton Global Forum marked their 50th Forum with style. Held over three days in Hong Kong, over 600 attendees representing industries in finance, consulting, real estate, healthcare, and technology participated in over 40 hours of programming.

“As the 50th Forum, Hong Kong was the pinnacle,” said Jane Simons, director of lifelong learning and the Global Forums. “The speakers were unparalleled, and the alumni planning committee was so dedicated. There were activities for the mind, body, and soul. There’s something magical about the Forums, and it really comes back to the alumni. They’re so proud to showcase their school, and they have the connections to make it a valuable experience.”

When Amazon asked cities to bid to host its second North American headquarters — dubbed HQ2 — Wharton students answered with two competitions to persuade the tech retail giant to choose Philadelphia. On October 13, the winners and finalists presented to judges and Philadelphia Mayor Jim Kenney at an on-campus reception. A portion of Shehryar Khursheed’s, W’21 entry was even included in the final proposal submitted by the city. “If Amazon is looking for thinkers, doers, and revolutionaries; if Amazon is looking to change the status quo, to push the boundaries on knowledge, to ripen the environment for change; if Amazon is looking for a testament to the past and a plan for the future, its next stop should be Philly.” 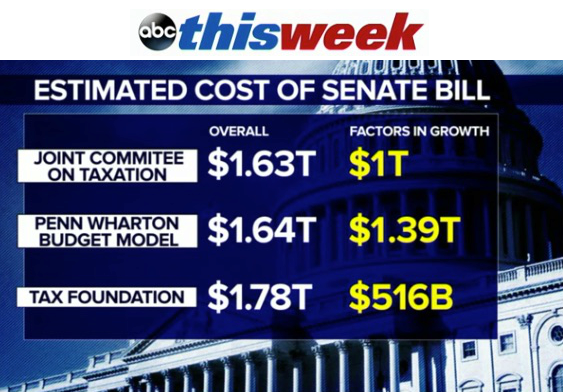 The nonpartisan, interactive Penn Wharton Budget Model (PWBM), first released in 2016, became a fixture of the media thanks to unprecedented coverage of its policy briefs, especially those on tax policy. The coverage spanned hundreds of broadcast and print media hits including CNN, C-Span, The Wall Street Journal, The New York Times and the Associated Press.

PWBM even made an appearance on ABC’s This Week with George Stephanopoulos. The above image was shown during his interview with Senate Majority Leader Mitch McConnell in December. Through simulations and analysis, PWBM helps policymakers and the public better understand the economic and fiscal implications of proposed policies.

The Joseph H. Lauder Institute of Management and International Studies has established the Jacobson Venture Awards thanks to the generosity of Andrew Jacobson, WG’93, and Marina Kunis Jacobson, G’93, WG’93.

This new program seeks to provide Lauder students with the opportunity to focus their energies on their entrepreneurial venture during the summer. The winners of the 2017 Jacobson Venture Award included: Thomas Cavett, POWTI Innovations; Nidhi Shah, revoLOOtion; Antonio Munoz Villanueva, Advans Health.

Mentioned in this story