“One of the reasons I love Wharton is because the School truly places value on experiences, and where education lies in those experiences.” – Ryan Torres, W’25

Back in December 2022, Wharton Stories covered the upcoming expedition of Wharton sophomore and endurance athlete Ryan Torres, W’25, who planned to cycle the world’s tallest volcano to raise funds for World Bicycle Relief, an international nonprofit dedicated to improving access to cycling around the world. When Wharton Stories caught up with Ryan a month after the initial interview, he Zoomed in from a rented flat in Buenos Aires, where he spent a week in recovery from his journey; and again later, for an in-person touch base with the bike itself on the University of Pennsylvania’s historic campus in Philadelphia. From there, Ryan spoke about the unexpected challenges, life lessons, and the critical decisions that shaped his journey to the heart of South America.

Undertaken upon a prototype provided by Why Cycles and Revel Bikes, Ryan utilized the bike’s titanium frame and enormous tires to power through to the top of the 22,000-foot-tall volcano, the peak of which is perched at the crown of Patagonia. The bike is a veritable tank, engineered to withstand the harshest conditions; it carried Ryan hundreds of miles, through both the stinging sands of the Atacama Desert and up to the towering peaks of Ojos del Salado.

And yet when Ryan brought the prototype back on campus after he returned from Argentina, just days before the start of Wharton’s Spring Semester, it fits right into the bustle of Penn’s iconic Locust Walk.

Ryan’s trip, while epic, also constituted a historic milestone: in successfully completing the grueling ride up Ojos del Salado, he also broke the world record for the highest point ever reached by someone solely via bicycle. Sponsored by GoPro, the camera strapped to Ryan’s helmet secured proof of the world record, and documented all that he saw and experienced; from the seemingly endless miles he rode across the Chilean desert, to his nail-biting finale at the top of the Andes.

While Ryan embarked on his trip with his cycling partner and fellow endurance athlete, Leo Teneblat, Leo dropped out due to a medical emergency as they rode across Chile’s Atacama Desert, which meant that twenty-year-old Ryan finished the ascent up Ojos del Salados by himself.

Why did you and your expedition partner, Leo, decide to cycle Ojos del Salados?

Leo and I are a match made in heaven; he stands as the first person to bike across the Himalayas in their entirety, and is an experienced and mature biker. After we got connected, we decided to do something out of the ordinary, and hatched a plan: to use bicycles to cross both the Atacama Desert and summit Ojos del Salados.

The conditions of the desert are very extreme; like, 110–115-degree Fahrenheit days without a breeze of air. It’s the driest desert in the world, the visceral truth of which emerges when you cough and realize that sand is in your lungs. Our minds were haunted by thoughts of dehydration, constantly; and for good reason, too. On the fourth day of our expedition, Leo had a medical emergency and needed a doctor’s attention immediately. He was rescued, evacuated to the nearest hospital after a four-hour car ride out of the desert.

But, despite the fact I was now alone, I felt fine; so I pushed. I finished biking the desert and got to base camp at Ojos del Salados. It was just the start of the summer season, so there was nobody in the mountains. I climbed the whole volcano alone. The previous record holder had a bike, a crew, and a pickup truck. Here, I was carrying all of my gear on the bike by myself, which increased the workload exponentially. But I decided to keep pushing on.

Physically removed from the adventure but never out-of-touch, Leo tracked my location via satellite phone, which insured that someone knew my physical location at all times.

How did the ascent unfold?

Going from base camp to my second stop, further up Ojos del Salados, represents the worst day of my life. At that altitude, all you think about is your blood oxygen levels, and ensuring that your brain and your muscles are in good shape. I was getting into the “sixes;” AKA when your brain is receiving a little more than half the oxygen it should. Mentally, you’re not really there; you’re on autopilot, and everything takes more effort, I didn’t have the energy to think.

At about 15,000 feet, I realized I needed to lie down. Even attempts to break up some chocolate bars for energy resulted in struggle. I tried to sleep; but, five minutes later, I noticed that the beating of my heart was far too quick for comfort. In that moment, I honestly thought I was going to die. My thoughts raced: if I’m lying down, and my heart is beating at full speed while laying down, what’s coming next?

Those were the conditions with which I dealt. Very little blood oxygen; which makes everything harder, especially in ankle-deep sand and wind. Sub-zero temperatures on the mountain. But for me, the theme of this expedition was Never Give Up. If you really want something, you must go out there and give it your best.

The extreme conditions challenged me beyond words, and Leo’s untimely departure impacted the logistics because his evacuation meant I carried everything solo. But I didn’t want to give up; even when I thought I was going to die, I couldn’t give up. It didn’t feel like there were any other options and I wanted to persevere. I’m grateful I did it. It was all about doing something hard and it was harder than I even expected.

If I’d broken the record and it had been a walk in the park, I wouldn’t have found it gratifying or fulfilling. I suffered. It was harder than anything I’ve ever done in my life; but it’s what I signed up for, and I’m grateful for that.

Frankly, this experience sounds terrifying. How did you know you were going to be okay?

It is unusual for anyone to embark on an expedition like this alone. However, one aspect about Ojos del Salados is that the volcano is essentially a mountain, but with desert characteristics. While other 20,000+ foot peaks throughout the world are covered with snow and rocks, Ojos del Salados remains sandy, even at the very top. It attracts those who seek to break records; like both the records for the highest altitude climbed by a car and a motorcycle broke on Ojos del Salados, respectively.

But both these expeditions also had three different sets of support staff with two cars, a buggy, a tent with a generator, and world-class food. In contrast, I ate instant ramen and powdered soup, hunkered down in a cheap tent and cheaper sleeping bag, all by myself. If I remember correctly, they were about 40-years-old; I had just turned 20.

Out there, it’s super high stakes. It’s four hours by car from the nearest town or hospital. That’s practically Philadelphia to at least northern Connecticut; not an inconceivable distance, but it’s a lot.  You can get frostbite and easily lose a finger; maybe a foot. But in these high-stakes situations, you have to hold back from the panic button and see the goal from a higher vantage point. Use logic: even when my heart rate jumped the way it did, up at Camp 2, I made decisions about my health based on the information I had rather than the emotions which I felt.

How will your expedition influence your relationship with Wharton and vice versa?

Education is a continuous process that goes beyond the four years at Wharton, a way of seeing the world beyond the books you read and classes you take. One of the reasons I love Wharton is because the School truly places value on experiences, and where education lies in those experiences. Learning how to make decisions under extreme duress is just as valuable of an education as classroom learning. They complement each other. An employer doesn’t just need someone who can crank out balance sheets, but they also want someone who can make critical decisions in complicated situations. They want someone who can persevere in the face of adversity.

In terms of future plans, the extreme physical and mental deprivations I faced on the mountain have given me a clearer perspective on what I want to do with my life. I have decided to embark on more ambitious expeditions to keep challenging myself and to explore the world and the natural beauty it has to offer. In this stage of my life, I am focused on learning as much as I can, in as many different fields as I can, from as many people as I can. 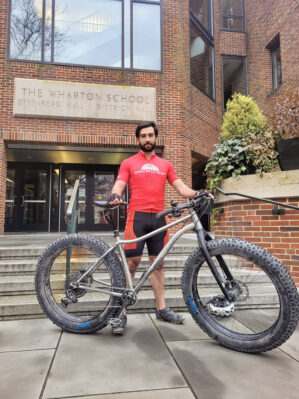 How an endurance athlete trains while studying for finals at Wharton:

Ryan utilized the Pottruck Health and Fitness Center to study while he trained. His favorite spot is on the third floor of the athletic center, where he balanced an iPad with all of his notes for finals as he biked on the stationary machines. He describes a “hilarious dichotomy” of reading both accounting notes and medical emergency advice at the same time.

A note on the shoes:

Ryan is no stranger to shoe-string budgets, and purchased this pair on his first major cycling expedition, when he rode across America from coast-to-coast over the summer of 2022. As Wharton Stories reported in December’s article on Ryan, he purchased his road bike on Craigslist, but he also did the same for his shoes and pedals.

He recalls: “Clip-in shoes and pedals were too expensive for me, so I found a used set on Craigslist and drove an hour-and-a-half to New Jersey to pick them up in-person. Because I didn’t know how to clip in and out of the bike during the first few days of my cross country trip, I fell many times.

I also used these shoes again after I completed my butterfly swim to and from Alcatraz Island in San Francisco. Afterwards, I still had gas in my tank, so decided to bike up Mount Diablo over the Bay. When I purchased the Craigslist road bike, it came with the front brakes broken, and I couldn’t afford to repair them throughout the entirety of my ride across the country. They never got fixed, so when I biked back down Mount Diablo (the highest point in San Francisco), I had to try and stop by using my feet to create friction on the asphalt. This is why, even today, the toes of these shoes look totally sandblasted. They proved just as trusty and reliable throughout my expedition in Chile as they did that crazy day in California.”

What Ryan loves most about Wharton:

“To me, the defining characteristic of a Wharton education is that it not only teaches business acumen, but how to be a businessperson. These expeditions have strengthened the intangible skills that my Wharton professors often highlight during their lectures; like high-stakes decision making, logistics, confidence, persuasion, negotiation, and how to achieve one’s desired outcome despite clear limitations. These skills complement my education at Wharton by enhancing personal character development, which will have a direct carryover once I start a business.”