Ubuntu Pathways, a 2018 Lipman Family Prize Honoree, breaks the cycle of poverty by providing South Africa’s most vulnerable children with what all children deserve –– everything, every day.

Jacob Lief’s first big challenge came the day he realized school supplies and computer labs couldn’t produce the meaningful difference he set out to make in the lives of South African children.

When he and a local school teacher, Malizole “Banks” Gwaxula, launched Ubuntu Education Fund in Port Elizabeth in 1999, their goal was to help orphaned and vulnerable children go to university. “Apartheid was over, and everyone could go to school, but these kids were living in shacks. Non-profits like ours were providing computers and cups of soup, and then moving on. How was that going to get people to college?”

Lief and Gwaxula wanted to do something more substantial, so they set up a pilot program with libraries and computer centers in local schools, where kids could come every day. But no matter how many hours the students spent with Ubuntu, they were returning to poverty-stricken, often abusive homes every night. Many had lost one or both parents to HIV, or had parents who were children themselves. To get home, they walked through neighborhoods where they were in constant danger of being mugged, assaulted, and raped.

“It became apparent that grade eight was too late to start,” said Lief. “We realized that we needed to start during the first trimester of pregnancy. We must invest in these children every day of their lives, and that starts by stabilizing their home.”

Lief’s second big challenge was to stop focusing on numbers. Early on, Ubuntu’s wildly successful fundraising efforts were linked to touching the lives of as many children as possible, rather than transforming their lives.

“We were winning awards and raising tons of money, but that money was based on quantity, not quality. It was like drug money. It was killing our souls, and it took us five years to wean ourselves off it,” he explained. “We realized our goal was to raise children, not money. There is no exit plan when it comes to a child’s upbringing. True sustainability comes from investing in a child every day of her life.”

Often challenged as to how Ubuntu can reach more children for less money, Lief points out that we never ask that question about our own children. “Subpar supplies and poor infrastructure is not better than nothing. The promise of resources and education can raise expectations.  Providing a poor quality product after raising these expectations can do more harm than good. I would not accept this for my own children, we shouldn’t accept it in the townships of Port Elizabeth. The mind shift is to invest in these kids the same way we invest in our own children. That is the only way we will begin to break the cycle of poverty.”

Based on those early learnings, Ubuntu’s focus has pivoted from providing a little bit of help to a lot of children to providing “everything, every day” to 2000 children from “cradle to career” at their world-class health and education center in the heart of Port Elizabeth. Now called Ubuntu Pathways, the 19-year old organization works with each client individually to provide them with whatever they need to succeed, from school books to mental health counseling to HIV treatment to locks for their doors at home.

“If you need glasses to see the chalkboard, we don’t say, ‘We’re not a vision organization.’ We get you glasses,” Lief explained.

Though Ubuntu no longer focuses on traditional quantitative measures, their quality-based numbers continue to impress. In a community where one in three people is HIV-positive, 100% of expecting HIV-positive mothers in the Ubuntu community give birth to virus-free babies. Within four years of joining Ubuntu, 82% of clients are on track toward stable health and employment. In a region where 80% of youth are unemployed, 68% of Ubuntu graduates secure employment. The organization is currently sending 12 to 15 students to college each year.

One of those graduates, 27-year-old Nozibele Qamngana, joined Ubuntu at age 9, when Lief and Gwaxula opened a library and computer center at her school. Today, as a staff member and one of the faces of the organization, she regularly represents Ubuntu at international conferences around the globe.

“Let’s face it: Jake [Lief] is getting old,” she laughed, then added, “Who better to represent the organization than someone who came through the program? When we’re in the boardroom, I can tell them firsthand what does and doesn’t work here, because I come from this neighborhood.”

Qamngana and her older brother grew up with a single mom. She recalled, “All her life, for 29 years, my mother worked as a cleaner at a local hospital. I wanted to go farther than that. I wanted to be able to not just make ends meet, but help pay for my family’s needs.”

When her brother graduated high school, the family couldn’t afford to send him to University, so he took a job at a grocery store for $10 a week. “That extra money helped us at home, but we couldn’t save enough for college.”

Qamngana said she was unwilling to settle for the same future as her mother and brother: “I never believed that I was born to be ordinary. I simply could not accept that. Even as a young girl, I had big dreams. I have always wanted to change my family’s life. So when I saw this white person [Lief] coming in with a teacher [Gwaxula], I said to myself, ‘I don’t know what they’ve got, but I’m going to be at the front of the line’.”

She joined Ubuntu’s Young Ambassadors’ program, which led to her first international plane flight and a 3-week stay in New York City. She finished high school in 2007 and earned a full scholarship to University, becoming the first member of her family to graduate college. She worked at a corporate job in Germany for a year before returning home to work for Ubuntu as their External Relations Manager.

Since taking on this role at Ubuntu, she has collected an impressive list of awards and accolades. She said, “I love being recognized for the work I do, locally, nationally, and internationally. I have become a role model and a voice in my community. Coming from a two-room house, now I can afford to buy my mom a house of her own. I pride myself in this. And when I look to the roots of where it comes from – it all stems from Ubuntu.” 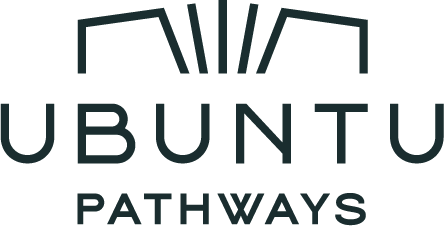