Wharton Stories » Why This Iranian-born Plastic Surgeon Earned His MBA

Why This Iranian-born Plastic Surgeon Earned His MBA

In 1982, at age 18, Amir Moradi crossed the border of Iran and entered Pakistan on the back of a pick-up truck with the hope of coming to the U.S. This was during the period of the Iran-Iraq war when all universities were closed, and he felt that his only chance to further his education was to leave Iran. Amir’s journey involved living in Spain for six months while applying for a student visa to the U.S.

Despite multiple rejections for a visa, he persisted. When the visa was finally granted, Amir recalls asking the councilor at the embassy if there was anything he could do to express his gratitude. She replied, “Just go study.”

That’s exactly what Amir did in the U.S., earning his undergraduate degree in biological sciences and going on to medical school.

Today, Amir is the CEO of a plastic surgery facility in San Diego with 20 employees. In addition to his surgical responsibilities, he serves on the board of directors of an insurance company in California, conducts FDA research, and is a consultant and adviser for several pharmaceutical companies. He and his wife of 33 years are also parents to four children.

As for coming to Wharton’s EMBA program, Amir credits a friend from medical school. He explained, “A few years ago, that friend called and said he was starting the MBA Program at Wharton. I emailed him a few months into his program to see how he liked it, and he told me that he loved it and was extremely happy he made that decision.”

Inspired, Amir decided to apply to the EMBA program to gain the knowledge and skills required to take his medical practice to the next level. “You don’t get a business education in medical school because the focus is on taking care of the patients, so this was a gap I wanted to fill.”

Tackling the GMAT with Learning Challenges

Even though Amir knew Wharton was the school for him, he had to overcome some obstacles in the admissions process due to his learning challenges.

“I was brought up thinking I may not have the same capabilities as other children because of the negative feedback I got from my processing and learning issues. I was diagnosed later in life and now know that I can overcome them. Nonetheless, that made the GMAT very difficult,” he said.

He also found it challenging to carve out the time necessary to prepare for the test because of his busy schedule. When his first attempt at the GMAT resulted in a low score, an admissions counselor recommended that he retake the test in the same cycle. Unfortunately, his score did not improve the second time.

That’s when he knew he needed to get some additional help. Taking a GMAT preparation course did the trick. He went to class after work and learned the techniques and strategies necessary to succeed. The next year, he took the test again and did much better and was accepted into the EMBA program.

“If you have learning issues and are looking at the GMAT, find a strategy that works for you,” said Amir. “For me, I needed a structured approach to preparing. If this is your passion, don’t give up. I was willing to take the test multiple times if necessary to go to Wharton.”

Amir began to use what he learned at Wharton right away. “The most noticeable difference is that I’m gaining better leadership skills and management approaches. I can make sense of our accounting and better organize our finances. I see what is required for our practice to be successful in the long term.”

The Wharton name is opening doors and adding credibility too. “Some companies are taking our practice more seriously and we’re seeing more engagement opportunities. We are on track to expand much sooner than I anticipated,” he noted.

The program is also helping Amir gain a broader perspective. “Through executive coaching and the Total Leadership elective with Prof. Stewart Friedman, I’ve seen there is more to life than just working. It’s important to be able to manage your time and see the big picture.”

Amir observed that a highlight of the program is his classmates. “My classmates are some of the kindest and brightest people I have ever met and I value our interactions. Wharton does a fantastic job of nurturing relationships not only by forming diverse classes, but also encouraging us to connect through academic projects and social events.”

Of course, being away from his family every other weekend is a sacrifice. Amir said, “When I first talked about this program with my wife, she was very encouraging. My kids — who range in age from 14 on up to their 30s — thought it was funny that I was going back to school. But they saw how this was very important to me, especially when I persisted with the GMAT. Two of them have even come to visit campus with me.”

Now a 2017 MBA graduate, he said, “It is bittersweet coming to the end of this experience, and I feel grateful and privileged to have had this opportunity. Wharton is now part of my journey in pursuing the American dream.” 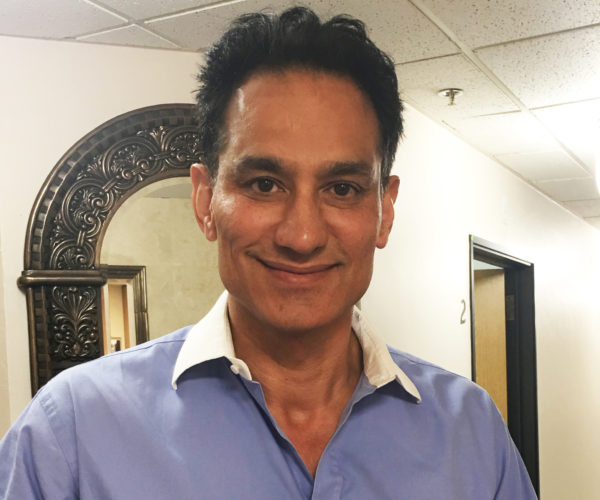